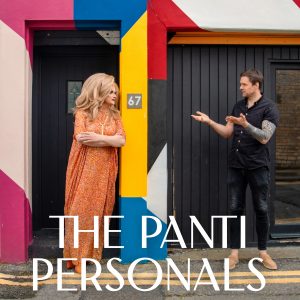 Panti Bliss is breaking out of lockdown and shaping a new podcast, a child of Pantisocracy, The Panti Personals, where she gets up close (two metres anyway) and personal with someone, for an intimate conversation and a private performance.

Her first guest is a man of more hats than Philip Treacy. It’s the handsome beast, mindfulness and music man, Niall Breslin, ‘Bressie’ of the Blizzards. This time Niall is Blizzardsless and performs two of his new spoken words pieces, ‘Teen Spirit’, which was first performed for this year’s St Patrick’s Day Festival, and inspired by the death of his teenage hero Kurt Cobain, and a brand new piece ‘Closing Time’, a tribute to the saving grace of Tom Waits, with Cian Boylan on piano.

Niall is co-founder of the mental health advocacy group ‘A Lust for Life’ and he hosts two podcasts, ‘Where Is My Mind?’ and one focussed on mindfulness ‘Wake Up/Wind Down’. In this powerful and revealing conversation Panti and Bressie talk love, life, anxiety and resilience, and swap stories on how physical and sexual abuse, witnessed during their school years, has stayed with them, and haunted them.

Find out more about Niall and his work : www.niallbreslin.com/ Or ‘A Lust for Life’: https://www.alustforlife.com/tools/mental-health/where-is-my-mind-podcast And to hear the Blizzards check out : open.spotify.com/artist/5wzUAvSTqE7BXNSL0OOzZR